Since we started planning a world tour, we realized how big the world is. Even if you take a year to travel, like we are doing, you will quickly come to the conclusion you cannot go everywhere you want to!

From the start we also decided where we wouldn’t go, based on a few rules:

Lastly, we decided to break down the trip in three steps, coming back to Portugal for a few days in between steps.

As we started on the task of planning a world tour, we decided to begin in Africa since it is the most challenging continent in our opinion. We considered various routes and ended up with the following: 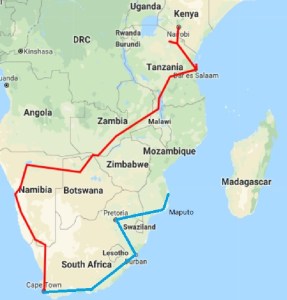 The first part of the trip will be with an organized tour. We will be part of a group of about 20 people plus a driver and a guide, together for 42 days straight! This is called an overland tour, and there are a few different companies doing them. We opted to book with African Overland Tours after researching and reading reviews for a few days. Our tour is with camping accommodation, which means most nights we will stop at campsites, pitch the tents and cook the meals as a group.

Such a tour is more expensive than doing everything on your own, but you will not see as much on such a short time. Also, the added safety was a deciding factor.

The tour will take us from Nairobi to Cape Town. From Cape Town to Mozambique we feel comfortable enough to travel on our own, as especially South Africa is quite popular for tourism. As an ex Portuguese colony, in Mozambique at least there will be no language barrier!

Book your tour for Nairobi or Mozambique:

By the end of our African journey, we will have visited the following countries in this order:

We watched the prices of the flights for some days before buying, using the website Skyscanner. Being flexible with dates is great since prices can vary a lot.
From Portugal to Nairobi, on the 9th of September, the flight has a connection in Casablanca and then a stop for refueling in the republic of Chad. It is operated by Royal Air Maroc and came to 548,48€ for both of us.
We then bought a flight from Maputo to Lisbon on the 8th of December, this time direct and operated by TAP, the Portuguese airline. We paid 505,23€ for both of us, bringing the total of flights for this trip to 1053,71€.

We are very excited for our African Journey! They say planning the trip is more fun than the actual trip, we certainly hope not!