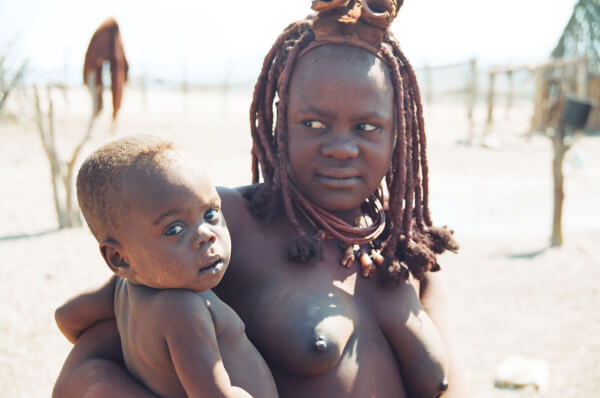 The Himba Tribe of Namibia are an indigenous folk residing in northern Namibia, in the Kunene area and on the other side of Angola’s Kunene River. Reaching numbers of up to 50,000, the Himba are semi-nomadic, pastoral people closely related to the Herero. They speak Otjihimba, which is rather similar to the Herero Language, and hold fast onto their cultural roots. They live very traditional lives and are an intriguing people who have managed to survive the region’s harsh climate for ages. They are very popular amongst tourists, and make for extremely beautiful and fascinating photographs.

The Himba breed cattle and goats, and the women of the tribe are responsible for milking the cows. The women tend to carry more labour-intensive work, whilst the Himba men involve themselves in political tasks and legal trials. The folk live in homesteads, simple cone-shaped structures of saplings tied together with palm leaves and sealed with mud and dung, that circle an ‘okuruwo’ (ancestral fire) as well as a livestock enclosure. Both the fire and livestock are closely linked to their belief in ancestor worship, with the fire signifying ancestral protection and the livestock permitting ‘proper relations between human and ancestor’. The Himba wear minimal clothing, but the women are renowned for covering their bodies with otjize, a combination of butter fat and ochre, which serves to guard them from the rays of the sun. This represents the vibrant red hue of the earth and the blood that symbolises life – it is consistent with the Himba ideal of beauty. The men of the tribe don extravagant jewellery when available, and the women just wear skirts or loincloths fashioned from animal skins. Adult women wear beaded anklets to protect their legs from venomous animal bites.

A day in the life of a Himba tribes’ person begins early. Women awake at dawn to apply their otjize and then milk the cows before herding them to the grazing areas. If the grazing is low quality, the whole village will then move to a place where there is better grazing available. Women spend their days nearby to the homestead, busying themselves with cooking, gardening, taking care of children, caring for livestock, and creating clothing, jewellery and otjize mixtures.

Upon the death of a Himba tribes’ person, the body is wrapped in cattle skin and set next to the sacred fire. During the first 24 hours, the period of mourning begins and cattle are slaughtered. The deceased are buried far from the village, and the horns of the slaughtered cows are placed atop the graces.

The history of the Himba is filled with disaster, including numerous droughts and guerrilla warfare, especially during Namibia’s strife for independence as a result of the civil war in adjacent Angola. In the 1908s, it seemed that the Himba lifestyle was going to disappear. An extreme drought killed 90% of their cows, and many of the tribe’s people gave up their herds to become refugees in the town of Opuwo.

The Himba are a friendly and hospitable folk who welcome visitors that come to learn about their culture. If you plan on visiting the area, be sure to pay a visit to these incredible people. During this, you have the chance to meet various interesting tribesmen and women, and will gain priceless education about their traditions as well as a completely new and interesting life experience.