Africa is most likely the least explored continent in terms of surfing; however, the few popular spots located in the southern end of the continent offer some of the most superb conditions for the sport in the world. South Africa in particular offers plenty of quality surfing areas, with places of magnificent beauty, such as Cape Town, Durban or Jeffrey’s Bay, with remarkable waves for surfing enthusiasts that almost never disappoint.

Here are our Top 10 Surfing Destinations in South Africa

An approximate three hour drive will lead you up the shoreline from Cape Town through to Eland’s Bay, where the waves are at their finest in the summer. This spot is highly recommended for more experienced surfers. The area offers a rocky, kelp-covered shelf (or small point) that rounds a corner and transforms into sand at a small river mouth. The swell refracts around the outer area of Eland’s Bay and peaks at the shelf, providing a hollow take-off and cylindrical wall that continues for around 150 metres. The surrounding town is very small, with one liquor shop and one hotel, but the atmosphere is interesting and somewhat lively. Often people will meet up at the bar in the hotel for a great laugh and chat after an even better surf, but know that the majority of these people will be speaking Afrikaans due to it being the dominant language of the region.

This legendary surfing destination is most certainly for the brave (and very experienced), being classified as one of the world’s famous Big Wave spots. A leg in the Red Bull Wave Competition is even held here, where enormous waves test the courage of competitive surfers. Dungeons, accessible only by boat, lies just around the corner from the Hout Bay harbour, behind the Sentinel and is at its finest with 20-foot swells. Tow-in surfers free-surf here, but the spot is mostly occupied during Big Wave contests.

The destination itself is a deep reef break with several sections stemming from the main break. The first main part is referred to as ‘the slab’, where people head out when the surf isn’t too big, and boasts a fantastic barrel area as well as an epic take-off spot. The following section is the two-point-five section, named after the 2.5 metres of water between the surfer and whatever lies beneath – a prime spot for photography. The last spot is known as Washburn’s Peak, where larger sets occasionally roll in, but are definitely worth the wait for those seeking a massive adrenaline rush. After an epic surf here, Hout Bay is a great place to head for a warm coffee or a relaxed drink. For those seeking some excellent adventure surfing, the Wild Coast of Port Edward offers some of the most beautiful coastal scenery in the world, as well as a rural coast with plenty of empty space in which to enjoy your privacy. The Wild Coast refers to the long stretch or shoreline between Cintsa in the south, and the Mtamvuna River in the north, which offers visitors an array of fantastic surfing spots. One of these spots is Ntlonyane (‘Breezy Point’), a regional classic with an exposed point break and reliable surf, and is best surfed when the swell comes in from the south, and the winds from the west/southwest. The finest surf across the Wild Coast takes place in winter, when the region is mostly dry and warm.

Situated in the rugged Eastern Cape Province of South Africa, around an hour’s drive southwest of Port Elizabeth lies the beautiful town of Jeffrey’s Bay. Perhaps the most renowned surfing destination in the whole of Africa since the 1960s. Jeffrey’s Bay (affectionately termed ‘J-Bay’) is ranked 2nd as one of the ‘Best Surfing Destinations in the World’, and offers a fantastic amount of surf, great swells, rides up to 800 metres long, and a lively surfing population. In fact, the waves are so good here that the area is home to numerous surfing events, one of which is the world-famous Billabong Pro – during which local and international surfers compete in the ultimate challenge to earn the title of the World’s #1 Male Surfing Champion.

Jeffrey’s Bay itself is known far and wide for its safe beaches with numerous surf breaks, each offering its own sense of enchantment. Popular surfing spots in this area include Kitchen Window, Magnatubes, Boneyards, Supertubes, Impossibles, Salad Bowls, Coins, Tubes, The Point, and Albatross. Jeffrey’s Bay itself offers various handcrafted clothing stores that cater for all tastes, as well as surf stores, handmade leather shoes, and gorgeous hand-crafted shell art. J-Bay is also the centre of ‘white gold’ (calamari), and is fortunate enough to provide this delicacy in abundance to any visitors who fancy a plate. Home to some of the most promising surfers and consistently good waves in the country, Durban offers adventurers regular swells, favourable wind directions, and a wide range of reef, point and beach breaks. With the Indian Ocean surrounding the city, the waters are warm and inviting, and many of the surfing spots here are great for beginners, but among the main breaks competition is fierce. The swells tend to get larger from south (uShaka Beach) to north, at the Blue Lagoon situated at the Umgeni River mouth.

The most popular surfing spot is Dairy Beach, which is also the main swimming area. The surf at Dairy Beach can get enormous and rough, but on calmer days, the area is perfect. Here, you can hire surfboards and get lessons very easily, in the very same place where world surfing champion, Shaun Tomson, learnt to ‘cut the lip’. For smaller surf, head southward to the Harbour, where the South Beach is split roughly into Addington, Pirates, and uShaka beaches. The sun-lovers tend to live in Umhlanga Rocks, where the surf and swim are not the same quality as that of the Bay of Plenty, but the crowd is generally younger and edgier. It is lesser known that two of the finest swimming/surfing beaches in Durban are located in the south side of The Bluff – it may be a challenge to get there, but the reward of ideal surf conditions in Ansteys or Brighton beaches is worth it.

The Kommetjie region is situated on the Atlantic side of the southern Cape Peninsula, around a 40 minute drive from the heart of Cape Town, and provides the finest and most consistent shore break in the Western Cape (perhaps second to Durban). Long Beach is located here, comprised of a long, sandy beach that is a favourite amongst surfers. The beach is one of the few breaks in the Mother City that holds up in a southeast wind. A permanent sandbar lies in the centre of the break, with peaks breaking on either side. The left side is very consistent and breaks into a channel, whilst the right will at times close out or fade (but will nonetheless make for a fantastic ride on the right day, which comes to an end over a rocky spot). This area is recommended for surfers at an intermediate level of skill.

Tours in South Africa to kick off your surfing trip

Situated between Melkbosstrand and Blue Berg Strand, about a thirty minute drive from the centre of Cape Town is the spectacular Big Bay. Travelling north up the main road, the area is difficult to miss. The best times to surf are on days when the east to southeast wind is blowing, providing ideal surf conditions. The area is renowned for its hospitable locals, and has some charming coffee shops across from the park, for a post-surf pick-me-up. This is a great area for beginner surfers when the waves are fairly gentle, and even better for the more advanced when waves are larger. The Surf Zone store is right next to the beach, offering rental boards, SUPs, and surf lessons. The people that frequent the beach tend to be broad-shouldered and international – kits and windsurfers from the globe over chase the world title train along this stretch of coast throughout the windy summer months. 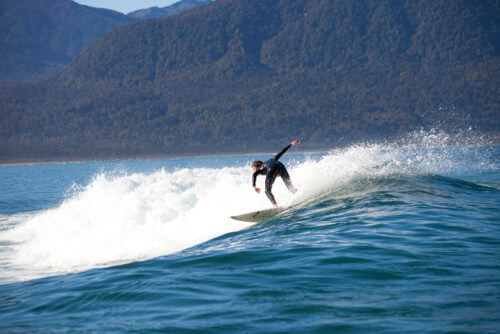 A fifteen minute drive from the heart of the city will bring you to one of the Cape’s most stunning beaches – Llandudno. The beach’s setting is simply magical, encircled by huge rock boulders and is overlooked by beautiful, towering mountains. The area is perhaps one of the most picturesque settings in the world, with turquoise blue waters, crisp white sand, and impressive boulders that all enhance its already remarkable visual charm. In fact, the area is so picturesque that it is arguably one of the most photographed places in Cape Town, and is also a favourite for beach sports, such as volleyball and beach rugby. The beach itself has somewhat of an elite atmosphere due to its stunning and upmarket location, but welcomes guests with the promise of seclusion.

Please be aware that the waves of Llandudno are not for the faint of heart, and are more suitable for intermediate to advanced surfers as the waves tend to get extremely hollow, while big rocky boulders loom near the right-hand section. Generally, Llandudno is a safe spot for most conditions, from offshore to onshore, due to the surrounding hills that offer protection and shelter. Parking here is limited, so be sure to arrive early for a great spot. The atmosphere here is trendy and hip, and the setting is simply breathtaking. Showers on the beach are provided.

Considered to be the birthplace of South African surfing, with the earliest record of a wave being surfed in 1919, Muizenberg has recently been voted one of the Top 20 surf towns in the world by National Geographic. The most popular swimming beach here is known as ‘Surfer’s Corner’, and offers fun, relaxed waves that are suited for all levels of surfers, but is specifically ideal for those just learning to surf – with more challenging waves just around the corner. It is also a long boarder’s paradise.

There are two reef breaks in the immediate area, with the Atlantic side offering numerous options. Surfing here is best on a northwesterly during winter, but the waters can be surfed most days of the year with a long board. There are three surrounding surf stores, where you can feel free to hire out boards and wetsuits, and a delicious lunch at the Knead bakery-deli makes for a great post-surf tradition. If you’re an adventure seeker looking for some great waves to surf, take a 40 minute drive through from the Cape Town city centre to the beautiful Noordhoek Beach. In order to reach the beach break you will have to journey along an expansive stretch of beach, which takes up to about half an hour to complete. On a good surfing day with a southeasterly wind, visitors will be treated to solid 2/2.5 metre waves that offer world-class tubes. The experience of surfing along fast, hollow waves in crystal clear water is incredible, but surfing here is recommended only for the advanced. Dunes is a very consistent, top-quality barrel producing destination on the Cape Peninsula, but the waves must always be approached with caution as the waters are known to have a fairly large shark population.

Tours to South Africa by length

Article by: Amy Saville
on June 3, 2014
Filed under  Africa Blog • South Africa • Travel Articles • What to do