In: Africa Blog / Destinations / Namibia / Travel Articles / What to do 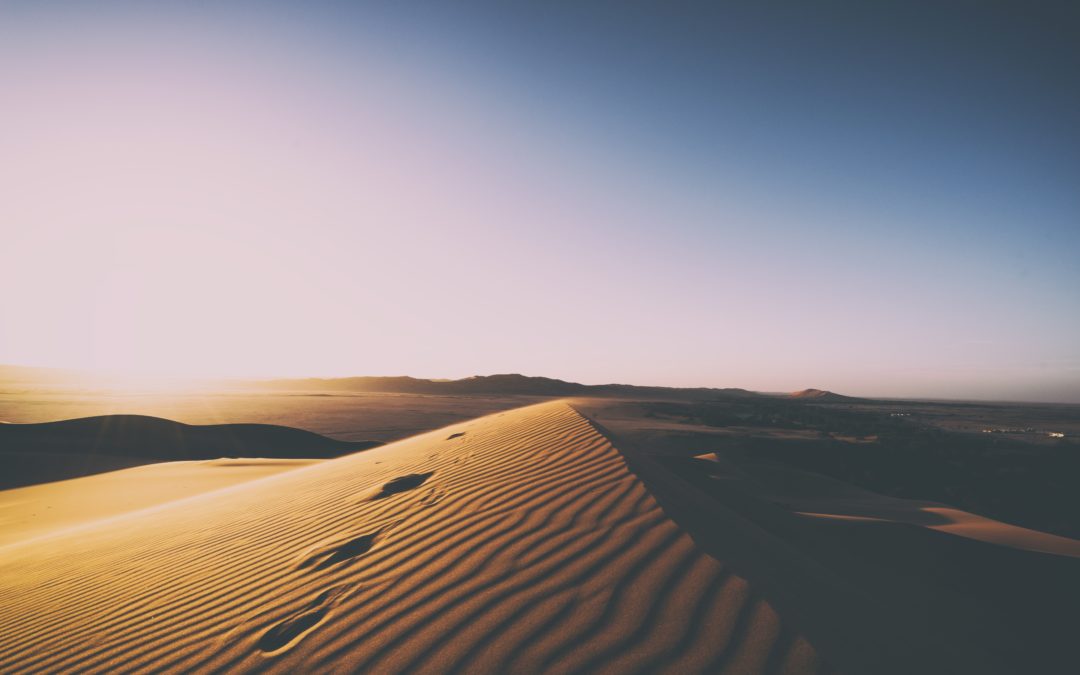 Photo by Jonatan Pie on Unsplash

If you’re thinking about traveling through Africa, I’m pretty sure the likes of Kenya, Tanzania and South Africa are the first destinations to come to mind. I don’t blame you as these are Africa’s most iconic safari destinations. But, make no mistake, few countries can match Namibia’s sheer natural beauty.

This diamond-studded country is one of Southern Africa’s most underrated gems. With breathtaking landscapes, beautiful desolate desert scenery and an abundance of wildlife.

Want to trek through dramatic canyons? Namibia has those. Dying to check an African safari off your bucket list? Etosha National Park has you covered. Surfing… check! Remote wilderness…check!

Simply put, if your idea of a dream vacation includes plenty of outdoor adventure, wildlife and photography, then this will be your favorite African country.

Still on the fence about traveling in Namibia? Well, here are 8 reasons Namibia should be at the top of your #2020travelgoals plus a few overlanding tours to get you on your way.

Forget the Grand Canyon (Sorry, Arizona)! Watching the sun melt into Namibia’s Fish River Canyon is one of the most epic African experiences you can have.

This behemoth canyon, although smaller than its Arizonian counterpart, is absolutely magnificent and breathtaking in its immensity.

Spanning an area of 5 900 km² across the south of Namibia, the Fish River Canyon beckons outdoor enthusiasts. It’s also a playground for landscape photographers with spectacular cliffs and winding ravines that create unforgettable views.

The main viewpoint of the canyon is situated in Hobas where you have to pay a small conservation fee at the camp. Well worth the fee as just a 10 km drive away from the crowds you’ll find epic viewpoints at the canyon’s edge. But, if you’re the kind of person who enjoys boulder hopping, mountain climbing and sleeping under the stars, then hiking through these ancient lands should be at the top of your bucket list!

The 90 km long Fish River Canyon hike is one of the most popular hiking trails in Southern Africa. Taking about 5 days to complete. However, intrepid travelers will be rewarded with hidden pools to cool off in, out of this world rock formations and a plethora of wildlife!

Keen for a little time travel? Dr. Emmett L. Brown’s DeLorean has got nothing on Twyfelfontein! Namibia’s first and only UNESCO World Heritage Site takes travelers 6000 years back into African history. Explore where ancient San people engraved their shaman experiences on a striking red-rock gallery of tumbled boulders.

With over 2,000 rock engravings, Twyfelfontein represents one of the largest rock art concentrations in Africa. Among the most celebrated engravings are a giant giraffe, a “lion man” with a hand at the end of its tail, and a dancing kudu. It’s believed that the shaman prepared to enter the realm of the spirits by achieving a state of trance or altered consciousness by dancing to rhythmic clapping, chanting or hyperventilation. Shamans deliberately placed their artworks at significant points in the terrain such as cracks or fissures which served as entries to the supernatural world.

Thankfully, you don’t need to hyperventilate to bring yourself closer to the spirit world. The Twyfelfontein World Heritage Site is shared with members of the local community to help them meet their basic needs. The heritage site also allows curious travelers to experience traditional Damara culture like nowhere else on earth.

Namibia’s Skeleton Coast will make the explorer in you giddy with adventure. On land, it’s best described by absences. No soil, virtually no life, no mountains and no escape from being sandblasted the moment you step out your vehicle.

But, if you’re brave enough to persevere through the desolate desert, a pristine coastline awaits just over the sandy dunes. The Skeleton Coast is the northern part of the Atlantic Ocean coast of Namibia, where dense fogs and mighty storms caused many ships in the past to run aground. 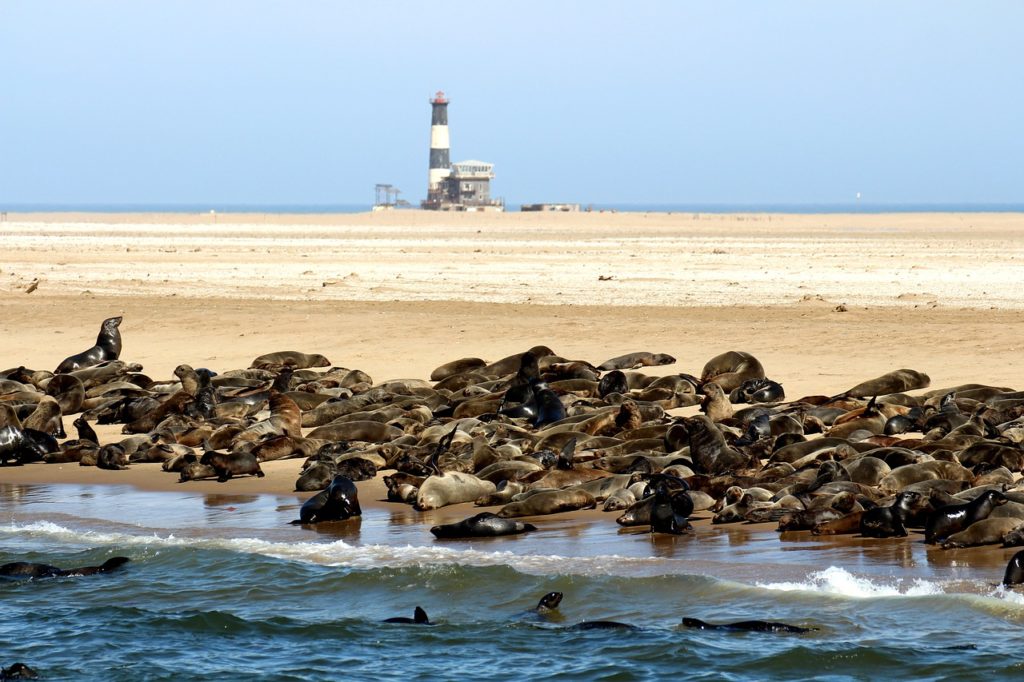 Although it is known as the world’s biggest ship graveyard, the chilly waters have an epic swell that lures adventure surfers with uncrowded lineups. Glide onto smooth left-hand barrels running for nearly 2.1 km with perfect sandy banks to cushion the bails.

Those that aren’t up for a surf can take a trip up to Cape Cross Seal Reserve. In another life, the reserve was used as a landing spot for the first Europeans to visit the Namibian Coast. Although today it is a breeding colony for more than 200,000 Cape Fur seals.

After a few days of desert landscapes, a change of scenery is sure to be refreshing. Enter, Epupa Falls. Sitting on the Kunene River on the border of Angola and Namibia. These lush waterfalls are akin to a perfect oasis. Surrounded by colored rock formations, palm trees and an astounding number of bird species.

Although Epupa Falls is remote and only accessible by 4×4 vehicles, the breathtaking views and unspoiled wilderness are worth the trip. Those in need of an adrenaline boost can try out some whitewater rafting along the river while culture enthusiasts can visit nearby Himba settlements and get a dose of local life. What would a camping trip in Africa be without a few ghost stories? Forget the passe tales of the boogeyman, Kolmanskop is the place to go if you’re after a real-life Ghost Busters adventure.

A few kilometers inland from the port town of Lüderitz, this deserted town was once one of the richest towns in Africa during a diamond boom. In 1908, Zacharias Lewala found a diamond while working in this area and showed it to his supervisor, the German railway inspector August Stauch.

This small find was enough to kickstart a diamond rush and hundreds of German families flocked to the area to try and make their fortune. Sadly, 40 years later the diamond-field slowly started to deplete. By the early 50s, the area was in decline and, soon afterward, Kolmanskop became a ghost town. Photo by jean wimmerlin on Unsplash

This might not sound like the usual setup for paranormal activity, but there is a reason why this epic destination was featured on the documentary tv show Destination Truth.

Whether you’re a believer or not, Kolmanskop is an epic place to explore old-world Namibia. It’s also popular with photographers for its settings of the desert sands reclaiming this once-thriving town. Desert surfing is one way to get an adrenaline boost but if you really want an adventure high, there is no better way than climbing the Matterhorn of Namibia.

Rising an impressive 1 728 meters above the ground, Spitzkoppe is a striking landmark on the Namibian landscape. Formed by ancient volcanoes dating back over 500 – 750 million years ago. This mountaineers paradise not only offers great rock climbing, but also spectacular wildlife viewing, including cheetahs and cobras.

If this isn’t cool enough, several sites around Spitzkoppe appear in the classic film 2001: A Space Odyssey, directed by Stanley Kubrick. While you probably won’t meet any hominids, there are a number of guided walks where you can view stories captured in ancient rock drawings.

Calling all history buffs, wildlife enthusiasts and lovers of great music!! This will be your favorite Namibian destination! From failed trade route to forbidden war zone, the Caprivi Strip has lived many lives before becoming one of Africa’s most unexplored wildlife wonderlands.

In 1890, a German politician traded the islands of Zanzibar to the British in exchange for Heligoland, an archipelago just northwest of Hamburg. The idea was that this random stretch of British Africa, which ended at the Zambezi river, would provide a route to the Indian Ocean and Germany’s East African territories. Unfortunately, the Germans didn’t account for Victoria Falls’ 355-foot drop which made navigation impossible. Although the trade was a fail for the Germans, the British got the island of Zanzibar. They proceeded to ship in Indian civil servants to run the island, including the family that gave birth to Farrokh Bulsara, AKA Freddie Mercury.

So in a twisted turn of history, the world got Queen! While after an intense civil war, it also revealed an epic destination for wildlife lovers.  The Caprivi is the wettest region in Namibia which sustains a large variety of animals. These include a large population of elephants which roam freely across the borders of the neighboring countries. Your African adventure would not be complete without a visit to Namibia’s most celebrated safari destination. Etosha National Park is a prime wilderness conservation area. The Park spans an impressive 22 300 square kilometers!

Although the region is most popular for having a salt plan so large it can be seen from space. Yet it’s also home to an abundance of wildlife that congregate around the waterholes, giving you almost guaranteed game sightings.

If you’re an intrepid traveler on the hunt for your next great escape, I’m sure you’re already picturing yourself overlanding through Namibia. So, to help plan your travels and fast track your adventure, here are a few experiences that I think you’ll love!