10 tips for taking better photos on your African safari Going on an African safari holiday is for many, the trip of a lifetime – something they’ve planned for and saved up for years. It’s understandable then that people want to return home with some spectacular photos to show their friends and family what they’ve seen and experienced.

The good news is that you don’t have to be a professional with a huge fancy camera to take great shots of the African bush and its amazing wildlife – you just need to know a few tips and tricks, even if all you have is a smartphone camera.

Here are our 10 tips for taking better photos on your African safari holiday.

If you come across a great wildlife sighting unfold in front of you – say a lion stalking its prey – try and convey the scene as a story through your photos, rather than just capturing the lion’s face. Try and get the lion’s different expressions, its sense of movement, and encompass the landscape in which it’s moving and the prey it’s going towards. This will make your safari photos that extra bit special.

2. Focus on the eyes

Whenever you take a photo of an animal, try to focus on its eyes – the same way you would do if you took a portrait photo of a human. If you have a digital camera or SLR, hold the button half way down as you focus on the eyes and once you have the focus, then press all the way down to take the shot.

Often first-timers on safari get so excited when there’s a sighting of lions or elephants, and they want to capture the moment, so they spend the precious few moments of the sighting glued to their cameras or smartphones shooting continuously, so all you can hear is clicks. Instead just take a few photos and then put the camera down so you can enjoy the sighting with your own two eyes and not see it through a tiny rectangle.

4. Work with the light 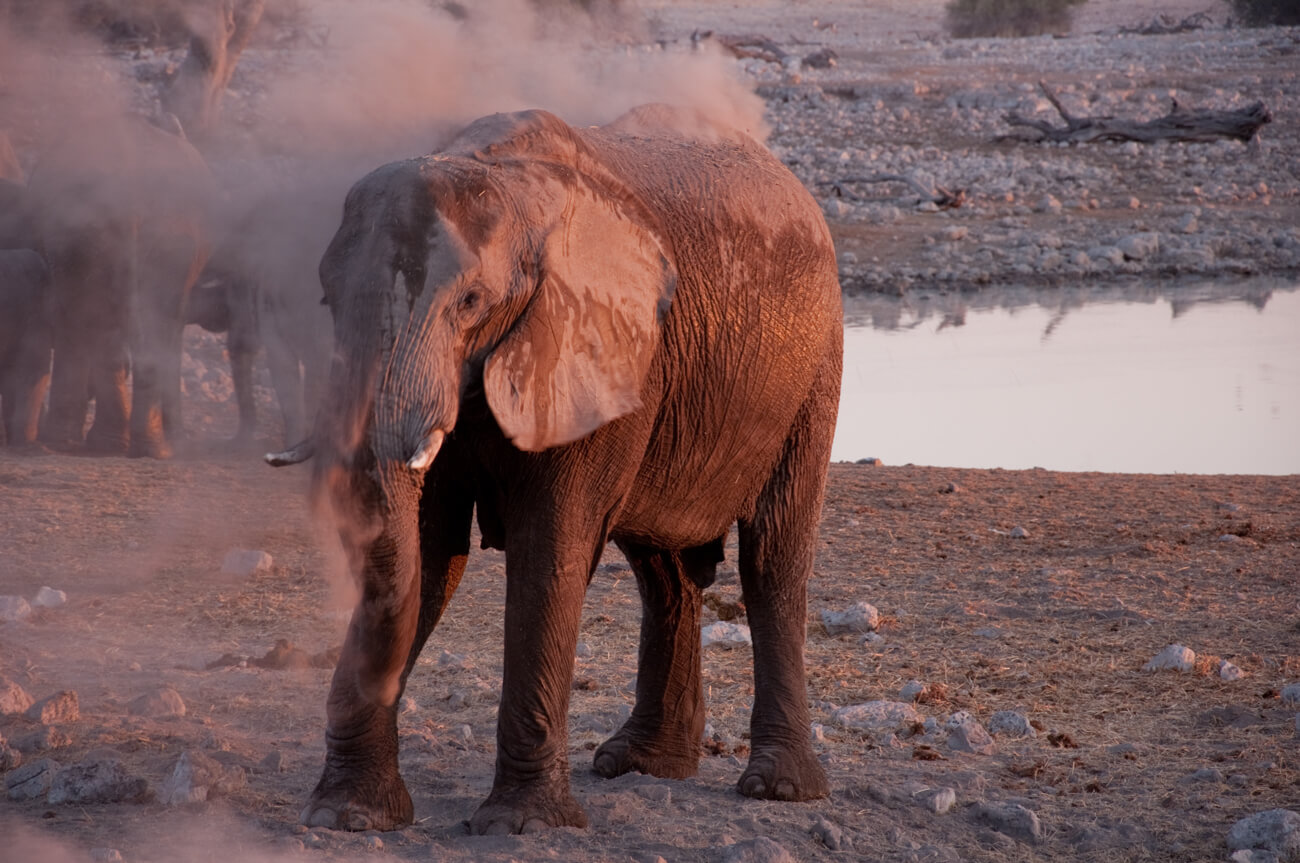 Photographers’ favourite times to shoot are in the early morning and late afternoon, when the light is golden, rich and soft. Everything looks more beautiful at these times of day! In the middle of the day, when the light is extremely bright and harsh, everything looks washed out in photos. Use this time of day to take a break and instead make sure you’re driving around just after dawn and at the end of the day to get the best pics.

5. Use the rule of thirds

You may get a great sighting of a leopard, but if you don’t have a good compositional structure in your photo, it’s not likely to be an amazing shot. Putting the animal in the centre of the photo doesn’t always make for an interesting composition. Instead use the rule of thirds – divide the picture into thirds horizontally and vertically and try to place the subject at the intersection of these lines – for example place an elephant walking towards the right on the left hand side of the photo just at the place where one of these imaginary thirds lines would be. There’s a tendency for people to try and zoom in as much as possible. Unless you have a really big zoom lens, zooming in on your digital point and shoot or your smartphone is going to result in a more pixelated image. If you’re not super close to an animal it doesn’t matter – instead of trying to get the animal’s face to fill up the shot, zoom out for a wider angle and get it in the context of its landscape instead, which can make for a much better photo.

It’s always a good idea to pack extra memory cards in the camera bag you head out with every day – especially if you’re going to be shooting some video as well as photos.

Many people come on safari and all they want to see is the Big Five – lions, leopards, buffalo, elephant and rhino – but there’s so much more to the African bush than its most famous mammals. There are fascinating and beautiful birds, insects, reptiles, flowers and trees to photograph. Even shooting some bleached old animal bones makes for a great shot, so don’t be too focused on capturing only the big stuff, otherwise you’ll miss out on the smaller wonders of nature. Being on safari is all about respecting the place you’re in – keep in mind that these are wild animals and you’re intruding on their space by being there. Check with your safari guide if you can use your flash on them at night and don’t push your lens out towards them if they are too close. Also remember to turn the beeping sound on your camera off – for the benefit of the animals and the other guests!

While it’s great to have a few photos of yourself on safari (especially with some exciting animal life in the background!) you didn’t travel across the world to miss out on action by spending half your time on the safari vehicle taking selfies with your back to the landscape. Leave the selfie stick at home and focus instead on soaking up the magical world you’re in.