Africa has some of the world’s greatest adventures, from mountain climbing and white water rafting to shark cage diving and bungee jumping. Here’s our ultimate adventurous African travel bucket list to get you inspired to start ticking some of these off! Find the perfect Overland Package Tour to tick off a whack of them.

Every year more than 1.5 million wildebeest migrate in a big loop across the plains of the Masai Marai National Park in Kenya and the Serengeti National Park in Tanzania. This migration is recognised as one of the “Seven Wonders of the Natural World” – an awe-inspiring spectacle of antelope on the move, pursued by predators such as crocodiles and lions. It is, without a doubt, one of the best wildlife experiences on the planet and should be at the top of any nature lover’s bucket list!

Africa’s highest mountain is also one of the continent’s most spectacular sights: a 5986-metre high volcanic cone covered in rainforest, alpine meadows and barren rock that looks like the surface of the moon. Climbing to the top is arduous but hugely rewarding – and it can be done without any technical climbing experience, making it an accessible adventure for anyone with a good level of fitness. Love a bit of adrenaline? Climb the towering sand dunes of the Namib Desert (the highest desert dunes in the world) and hop on a board to glide to the bottom for a thrilling ride. Just be prepared to get mouthfuls of sand when you bail! Find Namibia Package Tours.

While Victoria Falls, Africa’s most spectacular waterfall, is an amazing sight to see, what’s more fun is the adventure activities on offer on both sides of the falls in Zambia and Zimbabwe. The most adventurous adrenaline-inducing thing you can do is jump off the Victoria Falls Bridge on the 111-metre famous bungee jump that has you plummeting down to the raging rapids of the Zambezi River, with a view of Victoria Falls in the background. Hard to beat this bucket list African adventure!

The cold waters of the Atlantic Ocean around Cape Town are home to many great white sharks, made famous in numerous nature documentaries. While you don’t want to meet one while surfing, shark cage diving gets you up close to these incredible predators – with the bars of the cage protecting you. Shark cage diving is definitely an exhilarating experience – and not for the fainthearted! Find South Africa Package Tours. 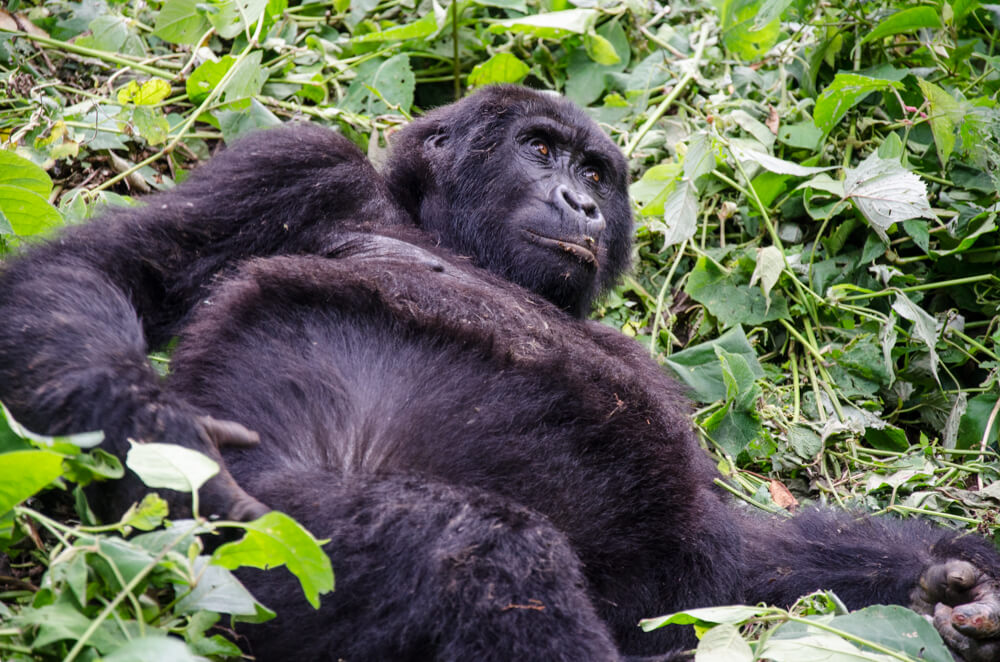 Adventurous hiking through the forests of Rwanda and Uganda yields one of Africa’s most memorable wildlife encounters: coming face-to-face with a family of habituated wild mountain gorillas. There’s nothing that quite compares to standing a few feet away from a 200-kilogram silverback gorilla while he picks his nose and nonchalantly eats leaves. The short hour you get to spend with the gorillas will stay with you forever.

The Zambezi River, Africa’s fourth largest river, offers some of the best white water rafting on the continent, either from Livingstone in Zambia or Victoria Falls in Zimbabwe. Nearly half the rapids on the Zambezi have been categorized as Grade Five, which is just about as challenging as you get! For the other smaller rapids, anyone over the age of 15 can attempt them (always with a professional guide leading the raft). Whichever class of rapid you tackle, it’s going to be a wild ride!

J-Bay, as its affectionately known, is South Africa’s surf mecca, with amazing waves such as Supertubes, which has been called the world’s most perfect wave. While the big waves lure the pro surfers, J-Bay is also a great place to learn to surf if you’re a complete beginner, and there are loads of surf shops and surf schools to choose from.

The laidback beachside backpackers’ haven of Tofo, on the southern coast of Mozambique, has been rated as one of the best places in the world to swim with whale sharks. A big supply of plankton means that Tofo has one of the highest concentrations of whale sharks in Africa. Swimming with these gentle giants in the warm waters of the Indian Ocean is a marine-lover’s dream! Find Package Tours to Malawi.

Africa’s third largest lake, Lake Malawi is a beautiful body of freshwater full of colourful tropical fish and flanked by golden sand beaches. While it’s not a high intensity or adrenaline-fuelled activity, kayaking the lake is certainly a memorable experience. Glide through the clear water as you paddle your way to uninhabited islands, stopping off at beaches to swim and snorkel with the fish.

Exploring the bush while wildlife spotting on the back of an African elephant, the world’s largest land mammal, makes a change from the usual game drives! Learn about these intelligent animals as you walk on paths through beautiful wilderness areas, seeing game such as zebras, giraffe, hippos and crocodiles, perfectly safe on your high perch. The mighty Orange River, which runs through the desert to the Atlantic Ocean, forms the border between South Africa and Namibia, is also a popular place to do fun multi-day canoeing trips. Paddle down the river through beautiful desert scenery of dunes and mountains, navigating white water rapids and cooling off in the river, before making camp on the riverbanks in the afternoons and spending the nights sleeping under the stars.