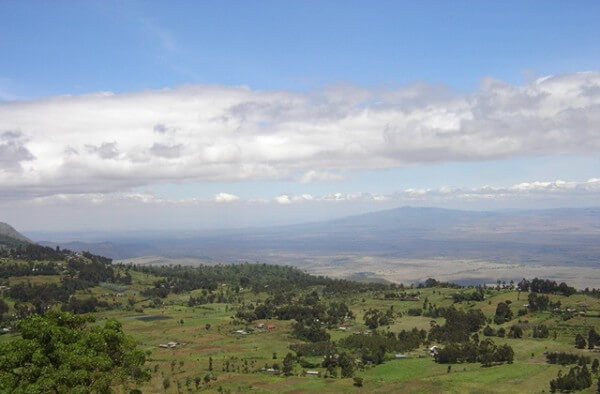 Africa’s Great Rift Valley is a spectacular 6,000 kilometre long geographic trench that runs through Kenya, stretching from northern Syria through to Mozambique in South East Africa. It was given its name in the late 19th century by John Walter Gregory, a British explorer. Presently, the ‘Great Rift Valley’ refers to the East African Rift’s valley which is in the process of dividing the African Plate into two new separate plates  – the Nubian Plate and Somali Plate. The Valley forms part of the eastern branch of the East African Rift, Gregory Rift, which begins in Tanzania and runs into Ethiopia. The Western Rift, also known as the Albertine Rift, includes plenty of the African Great Lakes, such as Lake Malawi, Lake Tanganyika (reaching up to 1,470 metres in depth), Lake Kivu, Lake Edward, and Lake Albert, which are some of the deepest lakes in the world. It is also bordered by some of Africa’s tallest mountains, including the Virunga Mountains, Mitumba Mountains and the Ruwenzori Range.

One of the Great Rift Valley’s most dramatic sections cuts through East Africa and separates Kenya into two sectors. The Valley encompasses the Cherangani Hills, as well as a range of volcanoes of which some are still active. The Tugen Hills to the west of Lake Baringo house fossils are preserved in lava flows which date back to four million years ago. The relics of various hominids, humankind’s ancestors, were discovered here. The Great Rift Valley region features hot springs, geysers and common earthquakes, and though each of the rift valleys in the area is linked, they are not all part of the same single network.

Geologists have shown that the Great Rift Valley was created by harsh subterranean forces that ripped apart the crust of the earth. These forces resulted in massive crust chunks sinking between parallel fault lines, forcing up molten rock during volcanic eruptions. The northernmost portion of the Rift, which is currently called the ‘Dead Sea Transform’, forms the Beqaa Valley in Lebanon which divides the Lebanon Mountains and Anti-Lebanon Mountains. Further south, the Great Rift Valley is known as the Hula Valley which separates the Galilee Mountains and the Golan Heights. The River Jordan starts here and runs southward through Lake Hula into the Sea of Galilee in Israel, then carries on south through the Jordan Rift Valley into the Dead Sea on the Israeli-Jordanian border.
In Kenya, the Valley is the deepest in northern Nairobi. Because the Eastern Rift’s lakes have no opening to the ocean and tend to be rather shallow, they contain high mineral content due to the water evaporating and leaving the salts behind. Lake Magadi holds rich concentrations of sodium carbonate, whilst Lake Elmenteita, Lake Bogoria and Lake Nakuru are all intensely alkaline. The freshwater springs that feed Lake Naivasha are crucial in supporting its present biological diversity.

There is no shortage of things to do in the Great Rift Valley. Spend your days game and bird viewing by boat on the beautiful Lake Naivasha. Fringed by papyrus, with the extinct Mount Longonot as a background, this is a spectacular place to observe and photograph the exquisite birdlife in the area, which include more than 400 different species. From the boat’s vantage point you will be able to experience wonderful close-up encounters of Cormorants, Pink Backed Pelicans, Herans, colourful Kingfishers and Fish Eagles. A day trip to Lake Nakuru is also a great way to spend your time here, where you will get to see millions of vibrant flamingos and plenty of rhino. Otherwise, embark on a tour through nearby Hells Gate National Park or experience evening game drives through the region which provide you with some incredible night game viewing. During night game drives, you can expect to see animals such as bat-eared foxes, aardvarks, leopard, long tailed mongooses, and more!

To visit this great place, have a look at our Tours to Kenya