There’s no doubt about it – Africa is the world’s best wildlife safari destination. Despite what many overseas visitors may think, Africa’s safari destinations are largely safe and easy to travel around, but the one thing that all visitors need to be cautious of is malaria. The mosquito-borne disease is present in many parts of Africa, and visitors to these places are always advised to take prophylactic medication, as well as to cover up their arms and legs and use repellent. If you want to avoid the malaria risk though, there are some great options for malaria-free safari destinations in Africa.

South Africa is usually the first choice for malaria-free safari destinations, because in most of the country there’s no risk of malaria. Kruger National Park, the country’s largest park, does have a low malaria risk, but there are many more options with just as much wildlife and beautiful scenery. 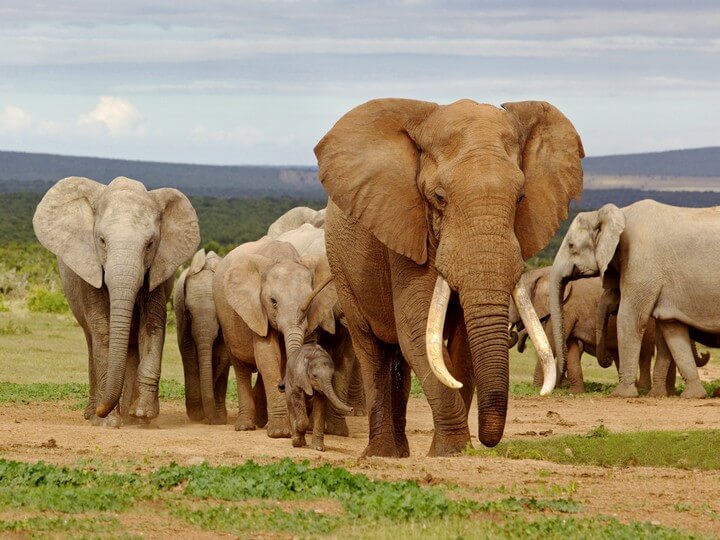 South Africa’s third largest park is popular with visitors who travel on the Garden Route, a beautiful coastal drive from the southern Cape to the Eastern Cape. Addo is just an hour outside the city of Port Elizabeth, and offers malaria-free game viewing amongst beautiful landscapes. The big draw of the park is its elephant population – around 600 of the pachyderms are resident here – one of the densest elephant populations in Africa. A four hour drive from Johannesburg on the border with Botswana, Madikwe is South Africa’s fifth largest game reserve and boasts the Big Five as well as cheetah, wild dog and black rhino and 300 bird species on vast open plains, woodlands and mountains. This malaria-free reserve, just two and a half hours’ drive from Joburg, is a popular malaria-free choice for budget-conscious travellers, with loads of affordable accommodation options. The park forms part of an extinct volcano and is home to the Big Five, hyena, wild dog and cheetah. While it’s smaller than many of South Africa’s most famous reserves, the wildlife viewing is easy, even for first time safari goers. If you love desert scenery, the Kgalagadi is the park for you. This spectacularly wild park spans South Africa and Botswana and is home to red sand dunes and vast open spaces – you never get traffic jams like you do in Kruger. While the wildlife isn’t as abundant as it is in other South African parks, the open terrain makes spotting animals such as lions, leopard, cheetah and foxes fairly easy. Another beautiful desert park, this massive transfrontier reserve stretches along South Africa’s border with Namibia. It may look barren, but if you look a little closer, you’ll find an abundance of fascinatingly adapted flora and fauna, from a third of the world’s succulent species, as well as 50 species of mammals, lizards, tortoises, scorpions and 200 species of birds. While there is a very low risk of malaria infection during the rainy months of November to June, during the dry months of July to September, there’s no risk of malaria in Namibia’s flagship National Park. The dry months are the best time to go to Etosha anyway, as this is when the park’s water sources dry up and the animals congregate around waterholes, making it incredibly easy to spot them. Just park off your car near a waterhole and wait for the zebras, springbok, giraffe, lions, elephants and rhino to arrive!

Travel to Etosha on one of our Etosha budget overland safaris

Article by: Sarah Duff
on December 23, 2016
Filed under  Africa Blog

← The 8 most unusual places to stay in Africa

5 reasons to go on safari to Mozambique →
X