In: Africa Blog / Destinations / What to do

If you’re planning to tour to Africa then it helps to know what the best time to visit Africa. Africa’s landscape is as diverse as it’s expansive, with each month offering something special. From gorilla trekking in Uganda to desert exploring in Namibia, and Big Five safaris in South Africa, adventure is abounding in Africa. The trick is to know what happens, where, and when.

For example, you won’t see the peak of the wildebeest migration in the Masai Mara in April. And if you were thinking about hitting Cape Town’s beaches in June then you better think again. The good news is that the region boasts such a myriad of adventures that you’re guaranteed an adventure year round!

To help plan your Africa overland tour, we have put together a month by month guide to the continent’s most iconic attractions and the best time to travel.

The start of the year comes with plenty of rain over popular safari destinations. But don’t let that put you off. Although wildlife viewing is generally best during the dry season, there are a few perks to Overlanding through Africa in January and February.

The Serengeti and Kalahari migrations along with the calving seasons are in full swing. This means plenty of predator-prey action, plus a few golden opportunities to sing The Circle of Life. The rainy season is also fab for traveling on a budget as this is the low season for many wildlife destinations. 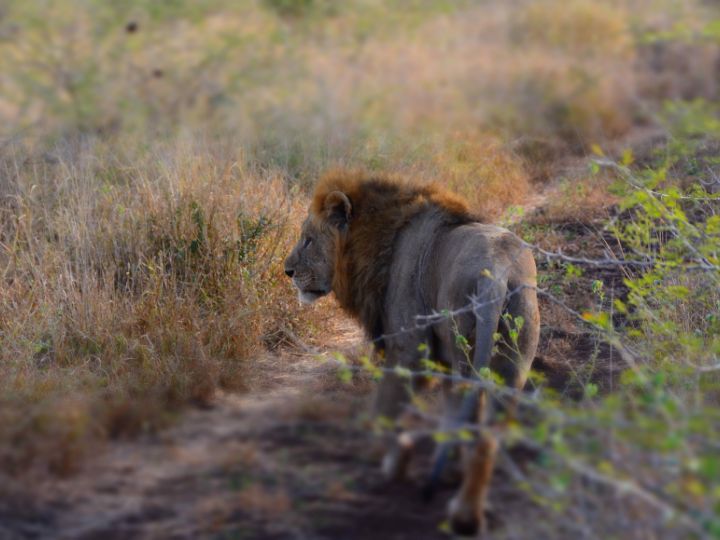 On the other hand, January is the peak of the dry season in Uganda’s northern parts. During this time of year, Murchison Falls National Park is primed for game viewing as the animals are easier to track. But if the 40ºC (104°F) temperatures are a bit too hot to handle then the higher altitude of Uganda’s jungles which offer a welcoming respite plus excellent gorilla trekking opportunities. For some downtime afterward, we recommend adding on a few extra days and ending your overland tour in Cape Town or Zanzibar.

March is a great time to travel to Africa. Not too hot and not too cold either. If you’re planning on a Southern Africa overland tour, this is a fantastic time to visit destinations such as Cape Town, the Winelands, the Garden Route, and the Eastern Cape.

On the East African front, safari season starts tapering off. Kenya and northern Tanzania will still have good game viewing in March, but by April some camps and lodges close due to the long rains. When it comes to gorilla trekking, Uganda’s rainy season begins in March and makes conditions muddy and tracks hard to manage.

By April, major safari destinations slow down. But, destinations such as Malawi, Zambia, Mozambique, and Seychelles start to open up at the beginning of the “Green Season”. Travel to Africa in May and you’re bound to find good safari deals. It’s shoulder season in the southern hemisphere (between the end of the rainy season and the start of the dry one) so from now until October is an excellent time for a safari in South Africa.

At this time of year, destinations like Zimbabwe, Zambia, and the Greater Kruger Park are coming into the dry season and the animals are starting to congregate around the waterholes, making them easier to spot. The beginning of May is also a great time to visit Botswana’s Okavango Delta before the rush of peak season in late June. In East Africa, the wildebeest migration will be heading through the western corridor of the Serengeti and will begin crossing the crocodile-infested Grumeti River on their journey back to the Masai Mara. River crossing season is the most nail-biting part of the journey and also the most popular – so booking in advance is a must! June also sees the return of gorilla trekking in Uganda and the opportunity to spot newborns. This time of year offers up some of the very best wildlife spotting (If you don’t mind the crowds). Not only is the migration river crossing at its peak in the Masai Mara, but it’s also the best time to spot big cats in action in the central Serengeti. Those who are keen on gorilla trekking won’t be disappointed either as Uganda will be in peak season and combines well with a safari in Kenya!

Further South, the Western Cape beckons off-peak travelers. It may be too cold to swim but there is still much to do for ocean lovers. July is primed for epic whale watching adventures along the coast from Cape Town to Plettenberg Bay. And, if you haven’t got your fill on predator action then be sure to visit False Bay for the Great White-Shark watching season. To top it off, the Garden Route comes alive with the Knysna Oyster Festival. 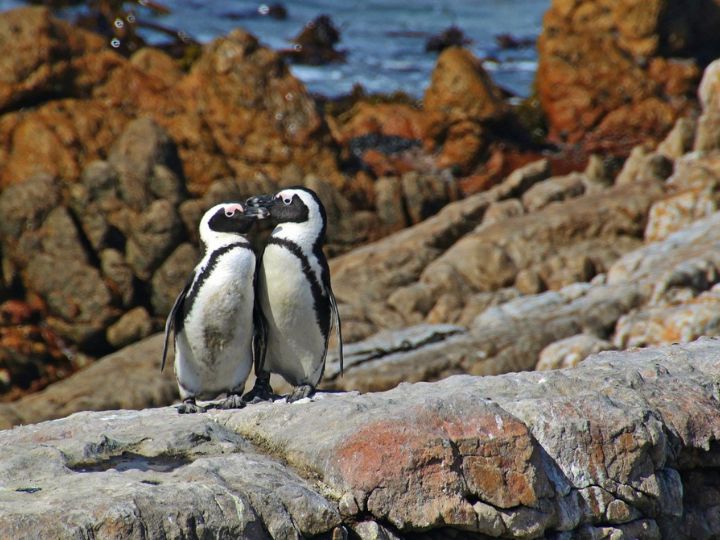 If your travel plans include visiting Botswana’s Okavango and the Namib desert then be sure to plan super early! The Delta will be in full flood during these two months and this is peak season for Namibia too, so availability may be limited.

In August, hoards of travelers will be in Kenya for the peak of the great migration. As an alternative, you could consider overlanding in Southern Africa. The weather is mild and dry (except for Cape Town) giving way to excellent wildlife viewing in Zambia, Botswana, and Zimbabwe. Plus, it is the best time to see Victoria Falls in Zimbabwe.

Prime game-viewing across most of Africa.

Wildflowers in South Africa’s Namaqualand region (August and September only).

September is widely regarded as one of the two best months to travel to Africa. The dry season continues and temperatures start rising but wildlife viewing will be excellent. Since virtually every destination offers very high-quality safaris at this time, the hardest part will be deciding where to go.

In East Africa, the migration action is still fierce in the Masai Mara region and it’s a great time to go gorilla trekking in Uganda and Rwanda. For a bit of wildlife variety, add Tanzania’s Tarangire National Park to your itinerary for a glimpse of the region’s elephant migration. Toward the south of Africa, Botswana’s most famous parks will be in their peak seasons for game viewing. This means that you might have to compete with the crowds in areas such as Okavango, Moremi, Chobe, and the Linyanti. But, the views make it worth the effort.

September is also a great time of year to be in South Africa. Toward the north of the country, the Kruger Park welcomes safari lovers with great weather and excellent wildlife viewing. It gets a bit cooler the further south you go but it’s not without its advantages. This is the peak season for whale watching in Hermanus as the Southern Right whales come into Walker Bay to calve. And, for the most jaw-dropping scenery make your way down to the Cederberg to see the fynbos in full bloom.

Generally speaking, October marks the end of the dry season in the east but there is still plenty to do while on an East Africa overland tour. Uganda’s second rainy season will be in full swing, so gorilla trekking is not advised. However, this is a great time of year to visit Murchison Falls or Kidepo.

While in Tanzania, you’ll find the temperature becomes much more pleasant as it drops. In the north, Tarangire elephant herds are at their largest, while there is awesome river crossing action in the Serengeti as the herds start their journey south.

Prime game-viewing across most of Africa.

November is a tricky time of year to travel to Africa. It’s rainy in some places, dry in others. Hot in some places and cold in others. But, if you know where to go then it will be the best time to overland in Africa.

As the rain starts to fall in East Africa, so do the crowds and the cost of travel. So, if you don’t mind a bit of rain in the afternoons then November is a great time to explore Tanzania and Kenya. It’s also the last leg of the wildebeest migration as the herds leave the Masai Mara and return to the Serengeti.

November marks the start of the rainy season in Southern Africa and is officially the end of the peak season in Botswana, Zambia, Zimbabwe, Namibia, and Malawi. This means that it’s a fantastic time to travel on a budget but the chance of rain is significantly higher. It’s also a great time of year to see lesser known wildlife events such as Zambia’s fruit bat migration and Mozambique’s leatherback turtle nesting season.

To avoid the rain, make your way down to South Africa. Although there will be a few spring thunderstorms in the Kruger Park, this is a lovely time to enjoy an overland in the Cape. As the ocean water starts to warm up, November marks the last few whale spotting weeks in False Bay and Walker Bay. However, the tepid weather is perfect for tackling Cape Town’s famous hiking and mountain climbing routes.

Learn more about a trip along South Africa’s Garden Route HERE, a perfect route to travel this time of year.

In December it gets hot across Africa but safari destinations across southern Africa will be getting plenty of rain. Because of this, water holes across the country open up and the animals disperse into smaller groups, making game viewing more difficult. However, Botswana’s Kalahari and Namibia’s desert coast are still worth visiting to catch a glimpse of zebra and elephant migrations and newborn seal pups can be seen bathing in the warm sun.

On the other hand, this is one of South Africa’s finest months for adventure travel, especially in the Cape and up the Garden Route. While it my not be the best time to go on a safari, it’s peak holiday season in the Cape, with plenty of outdoor events and beach time! From surfing to shark cage diving, wine tasting, and mountain biking, there is plenty to do for intrepid travelers.

While Tanzania and Kenya experience a bit of rain in December, these safari icons still offer great wildlife viewing. Although wildlife viewing may be a bit trickier in Kenya, Tanzania’s northern circuit is in full swing once again.